UCLA hangs on to hand No. 15 Washington first loss 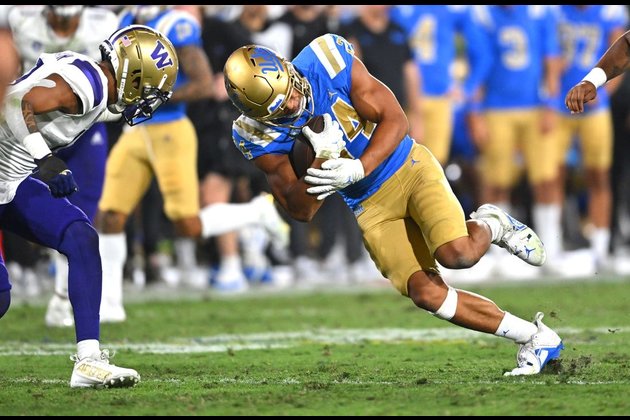 Dorian Thompson-Robinson went 24-of-33 for 315 yards passing, totaled four touchdowns, and UCLA weathered a fourth-quarter rally to hold off No. 15-ranked Washington, 40-32, Friday in Pasadena, California.

UCLA (5-0, 2-0 Pac-12 Conference) went without punting until the mid-fourth quarter and drove into the red zone on its first eight possessions - including two in the first half that failed to produce points - to build a lead of as many as 24 points.

The Bruins scored 24 consecutive points after trailing 10-9 early in the second quarter, bookending a 15-yard Thompson-Robinson touchdown pass to Kam Brown set up by a Stephan Blaylock interception with a pair of 75-yard scoring drives.

Thompson-Robinson capped each of the 75-yard drives with touchdowns: the first on a 12-yard pass to wide receiver Jake Bobo, one of two scoring strikes to Bobo on the night; and the second with a two-yard run.

Bobo's second touchdown on a 39-yard reception pushed the UCLA lead to 40-16 in the late third quarter, and the Bruins appeared on the verge of winning in a rout.

The nation's leading passer coming into Friday's contest with 347 yards per game, Penix went 33-of-48 passing for 345 yards and four touchdowns against UCLA despite an aggressive blitz-heavy look from the Bruins defense.

The strategy resulted in UCLA getting to Penix for the first two sacks the quarterback had taken all season, one from Washington transfer Laiatu Latu and another from Bo Calvert. Penix also threw a pair of interceptions.

However, he led two fourth-quarter touchdown drives capped on scoring passes of four yards to Devin Culp and nine yards to Rome Odunze on a fourth-down play. Successful two-point conversions on both scores pulled the Huskies to within a one-possession margin.

Thompson-Robinson and running back Zach Charbonnet combined to deny Washington's offense another opportunity and ice the win. They rushed for a combined 29 yards on the final possession, before Thompson-Robinson's first-down converting pass to Hudson Habermehl on third-and-5 officially sealed it.

Charbonnet rushed for 124 yards on 22 carries with a touchdown and added another 56 yards on three receptions. Bobo caught six passes for 142 yards.